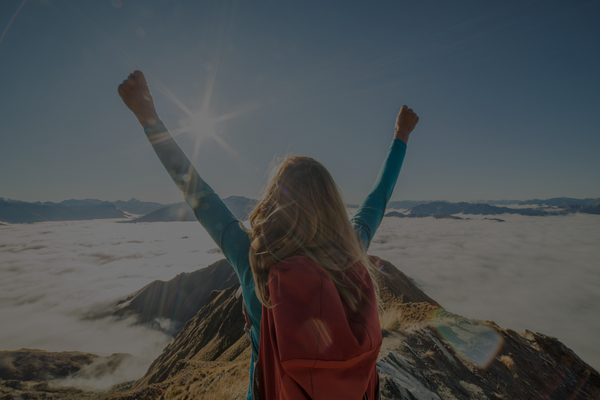 Everyone loves a good success story.  Katie’s story certainly qualifies! When I first met Katie she was crippled with fear, riddled with anxiety and panic, and generally spending her time on the floor with a fan blowing trying to calm down.  What a difference 18-24 months can make!

Katie had developed severe panic disorder, agoraphobia, and monophobia. She could not be alone for even a few minutes. On several occasions, Katie’s husband returned to their home to find police cars and an ambulance waiting for him as Katie was convinced that she was in danger and needed to be rescued.

A doctor prescribed a benzo to calm her down …. and it did. Taking the medication made Katie feel better, so at some point she decided that she didn’t need it any longer and stopped taking it. This is when things really went off the rails. Not knowing that she had to wean off the medication, Katie went cold-turkey, got hit HARD, then tried to to back to a slow taper.

When Katie randomly stumbled into an Instagram live that I was doing with Josh Fletcher, she was in the middle of benzo taper/withdrawal and experiencing the most severe and relentless anxiety symptoms she had ever felt in her life.  Katie spent most of her time laying on the floor on her accupressure mat just hoping to feel better.

Katie made numerous trips to the ER, only to be told that there was nothing doctors could do for her beyond putting her back on the medication she was trying to get off.

Katie began actively engaging in the process of recovery, taking one small step after another as best she could. Following the steps we talk about all the time – facing, surrendering, allowing, and building a new reaction to and relationship with anxiety and panic. The work was not easy.  Some days were really difficult and discouraging.  Some days were full of victories and encouragement.

Katie just kept at it, trusting the process, and learning bit by bit that anxiety and panic are uncomfortable, but not ever an emergency. She learned to pay attention to life, even when experiencing an anxiety spike or full panic.

How did she do it?  Katie broke her recovery into multiple “sections”.  Driving phobia. Monophobia. Being afraid to travel or go to the dentist.  In the end she realized that any panic or anxiety was useful exposure so she focused on driving as her exposure. Starting with a full bore panic attack sitting in her driveway Katie drove again and again, adding time and distance when she could.  It took her the better part of a year to get on the highway and really face her biggest fear, but the work she put in while driving translated to other areas of avoidance.

Katie can still experience panic but she describes it as an “annoyance”.  When experiencing panic in the airport in Paris – with her small children in tow – she even stopped to buy croissants and macaroons to bring to her next destination.  THAT is a new relationship with panic!

Anticipatory anxiety: Katie had to work hard on dealing with anticipatory anxiety, especially once she booked her trip to Europe and began to get anxious about that. She found that slowing down and applying the principles she learned in Seven Percent Slower were really helpful in that situation.

Planning to panic: One of the key aspects of Katie’s recovery journey was planning her exposures – then completing them even when she knew or at least suspected that she would panic while doing them. This is so important!  This is the part that forges that new relationship with anxiety that we talk about so often.

As of this recording, Katie is back to living her life. Driving.  Being a mom.  She’s working, engaged with her art again, and even planning a second solo trip to Europe!

Katie ended our chat with the two primary keys to her recovery.  The first was making a step-by-step recovery plan. The second was coming the the realization that she had to really WANT to get better, to the point where she was willing to go toward the discomfort of anxiety and panic to free herself from the discomfort of living such a limited life.  Katie knew that she was free to not get better.  That was a choice she was entitled to make.  She just didn’t see that as an option any more, so that mindset shift played a big role in informing her plan and the execution of that plan.

Find Katie And Her Art Online

If you’d like to learn more about Katie and her art, you can find her on Instagram.